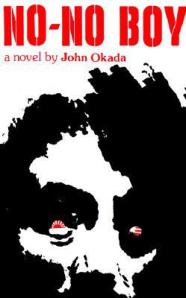 No-No Boy, published in 1957 by John Okada, brings up questions of identity and what it means to be American.  The novel is written in clear, captivating language that gives important insights into the life of post-WWII Japanese-Americans, which most people rarely see.

No-No Boy asks, why man’s inhumanity to man, what is all the fighting for?  In a non-bitter way that seeks understanding, the book spotlights the absurdity of rounding up every American-Japanese citizen and locking them in internment camps or jail.

No-No Boy presents the journey of Ichiro, who is just coming home to Seattle after being locked in prison for two years, for saying no he won’t join the US military to fight against Japan – the land of his parents and ancestors.  Ichiro has to deal with self-loathing, guilt and shame after his release from prison, “He lay there fighting with his burden, lighting one cigarette after another and dropping ashes and butts purposefully on the floor.  It was the way he felt, stripped of dignity, purpose, honor (5),” and is also shunned by the community and physically threatened for being a “no-no boy” upon his return.

John Okada does a brilliant job capturing the atmosphere of racism and war fear mixed with complicated and shifting family, cultural, and generational dynamics.  Ichiro’s mother treats him like he is a hero for not fighting her homeland – she is proud of him – but we find out his mother is delusional – she believes Japan won WWII and is coming in ships to rescue Japanese citizens in the US who did not betray their homeland.  His father is an alcoholic.  And his teenage brother won’t speak to him, and lures Ichiro out of a bar so his friends can beat him up.  Ichiro loses two of his only friends.  Yet through many traumatic events, Ichiro is left with a kind of strength and hope that he will be able to start again –and that there are still good people in America who know it was wrong to persecute the Japanese – and who want to help people like him.

No-No Boy is a taut, human, heart-wrenching novel of depth and genius.  Sadly, John Okada, a Japanese-American WWII veteran, went unrecognized for it in his lifetime – he died of a heart-attack at age 47.  No-No Boy was his only novel.

Like this one, from the poem “From Our Album” :

“Before the war”
means Fresno, a hedged-in house,
two dogs in the family.
Blackie, the small one, mine,
lapped at his insides
on the floorboard, on the way to the doctor.
Jimmy, my father’s shepherd,
wouldn’t eat after the evacuation.
He wouldn’t live with another master.
and pined away, skin and bone.
With feelings more than pride,
we call him our one-man dog.

In very few lines, Inada rhythmically brings us a bright scene of Japanese-Americans living “the american dream” – that completely shifts with the martyrdom of the family dog.  The dog embodies the terrible loss, betrayal and bleakness that took place when the Japanese-Americans were sent to internment camps and imprisoned on their own soil – just because the US was at war with Japan.

In his introduction to No-No Boy, Inada speaks of Okada as a literary hero for himself and other Japanese-Americans.  He calls Okada “love and action man,” and says that love is Okada’s legacy.  Love sustains us.  As Joy Harjo says, the real revolution is love.

Here is writer Shawn Wong talking about teaching the book – and how it should be read aloud.

Wong says that Okada learned to write from listening to the radio – and that’s why No-No Boy has so much exciting drama, monologues and life-like speech in it.